I was a quilter before I was a patchworker. The beautiful repeating nature of intricate patterns, the beguiling texture, the implied perseverance and diligence, the combination of delicate tiny stitches creating a strength to last generations. Everything about quilting fascinated me.

My journey into patchwork and quilting was atypical. I bought a vintage quilt top in an auction and determined to learn how to quilt it. I took a 150 mile road trip to Devon to the one and only quilt shop that a Yellow Pages could offer up in the days before Google search and they sold me a beautiful beech quilting hoop and a wooden spool of waxed thread, and I began. ( I talk about learning the rocking quilt stitch with Sandie Lush in my #greatbritishquilter podcast here). The rhythmic nature of the stitch, the rocking, the tactile wood of the hoop, beeswax, the rasp of needle tip on the top of a thimble. I fell in love.

Close to 20 years later I still love to hand quilt more than any other part of the patchwork and quilting process and for me, the pinnacle of that skill is the wholecloth quilt, and the wholecoth quilting style that I love the most is North Country quilts and the unparalleled expert in this area is Dorothy Osler, a founder member of The Quilters’ Guild and an academic and internationally renowned quilt scholar – and her books are full of treasures from her long career of research in this area and if you’d like to learn more about these quilts search out her work. 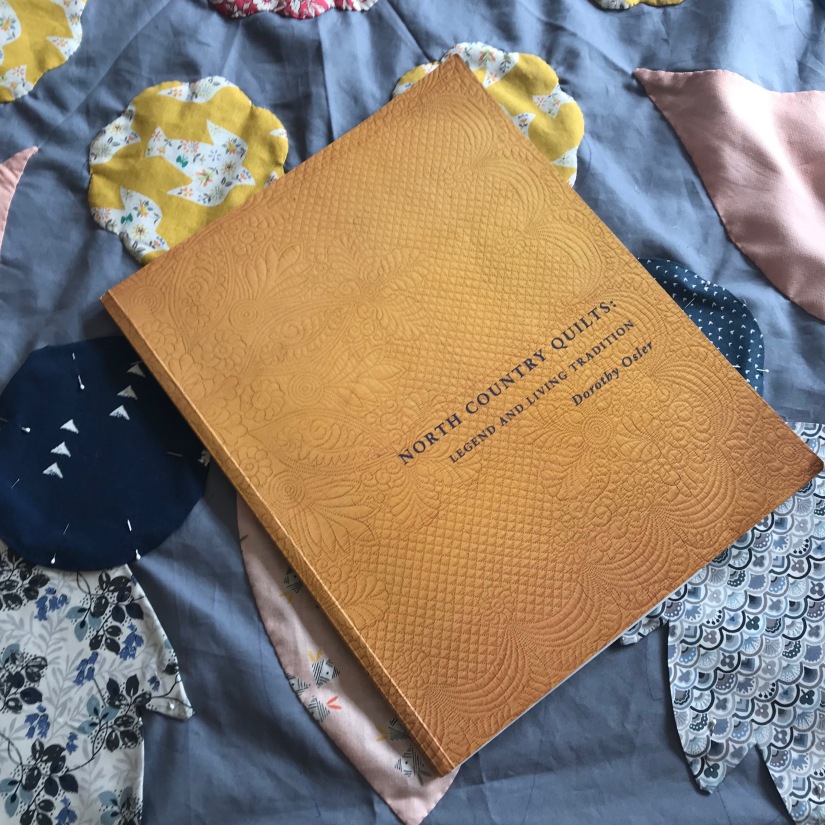 Britain has such a rich history of quilting. Patterns so beautifully intricate and uniquely local. Across the country different styles flourished, characteristic of their place, often attributable to one quilter or one village but sharing common traits across a region as quilters learnt from one another, patterns were shared and admired and professional quilt markers travelled and sold their skills. Wholecloth quilts from the north of England share a common set of characteristics and we have many surviving wholecloths from this area because quilting of this kind survived mostly in the margins in the 20th century where other income streams and entertainments were more scarce and quilts continued to be made commercially in these areas until the second world war so patterns and skills were preserved for longer. 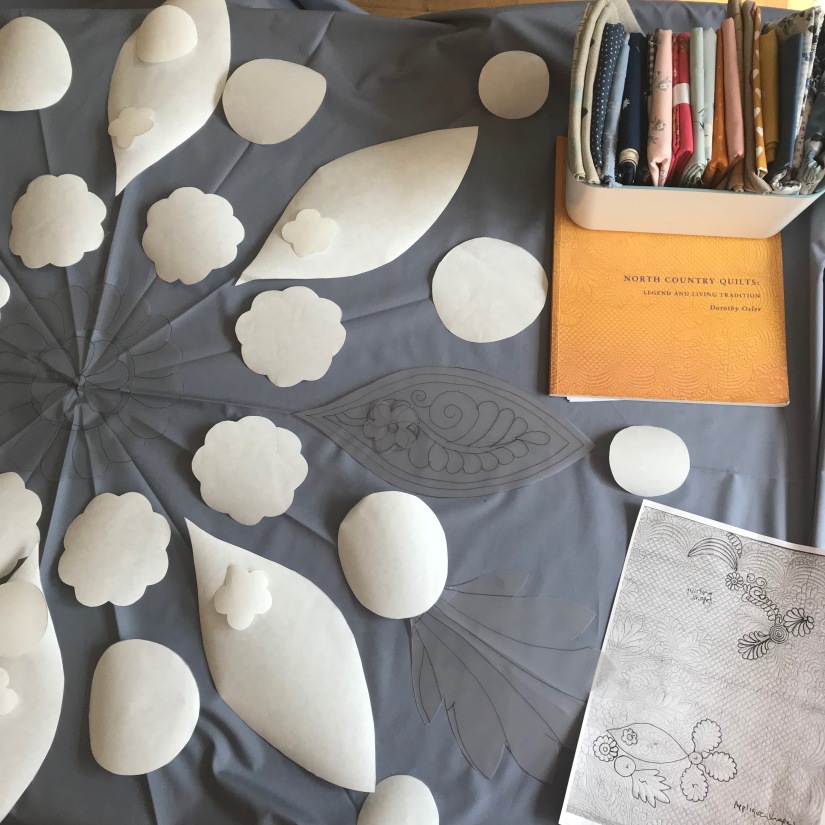 These quilts are often called Durham quilts, but the quilts of this region are more accurately called North Country Quilts because a common style is shared across the north from the Irish sea at Westmorland and Cumberland (now Cumbria) to the North Sea at Northumberland  and County Durham and as far south as the Pennine valleys. The quilts of this area share a style, floral, sweeping, dramatic form, the quilting is often exquisite and the patterns beautiful, almost modern in their drama and over sized nature. Unlike in other parts of the country the quilters of the north typically didn’t divide their wholecloth up into squares, borders and frames and then quilt within these less imposing spaces. Instead they quilted patterns that reached out from the centre, often almost touching the equally dramatic swagged floral borders and complex corner patterns that reached inwards towards the central rose. The spaces around these blowsy oversized roses and floral swags were simply quilted in tight crosshatch or a clamshell, tight geometric patterns the better to show off the natural forms of the flower centre pieces. A quilting treatment not dissimilar to many modern quilts today.

Wholecloth quilts might be seen as the Plain Jane of the quilting family. Their simple modesty often overlooked alongside their colourful pieced sisters, they suffer from a difficulty to accurately photograph, and they have such little appeal to the commercial quilt ‘industry’ that exists today because they require such simplicity of fabric and equipment, and by their very nature take so long to finish. An irony because in the past this labour intensity increased their desirability, quilted in sateens and silks the quilts of the north were commissioned by Windsor Castle, the hotel Claridges and others for the beds of the elite – their hand finished nature the epitome of luxury. 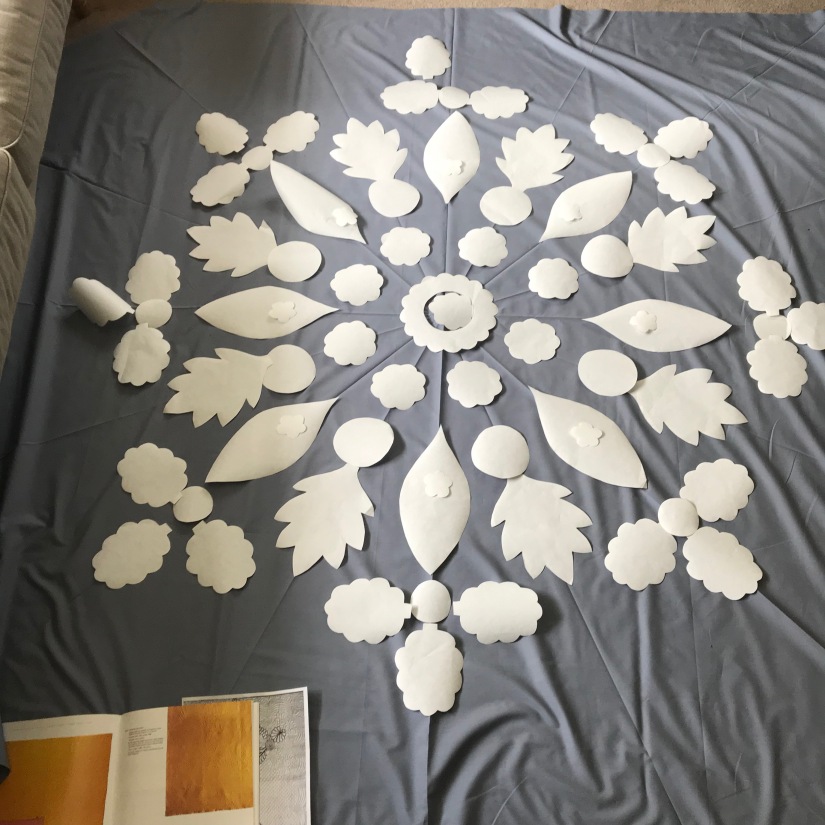 Yet if you take the time to study a wholecloth quilt you find a wealth of delights await you, especially if you love bold modern design. Because although at first sight the patterns can look busy, hard to discern accurately, but by breaking down the shapes and forms into their constituent parts, modern bold pattern pieces reveal themselves.

The domestic quilters of the North found markets in the rich elite of the south through a government mechanism called the Rural Industries Bureaux that ran through the 1930s as a response to the ravages of the Great Depression on the industrial areas of the UK. Mrs Mavis FitzRandolph a civil servant who was versed in the treasures of rural industry, was dispatched out into the country to search for and standardise a ‘quality product’ that she then took back to London and looked for high end patrons for these items. Variously praised for keeping rural skills alive and criticised for a kind of patronising condescension on the living traditions of rural regions and commodification of products that had existed outside of market forces – nevertheless this pioneering project floundered on the rocks of war in 1939 and the bright shiny future of the post war era had no place for such ‘old fashioned’ ideas and that was the end of that scheme. 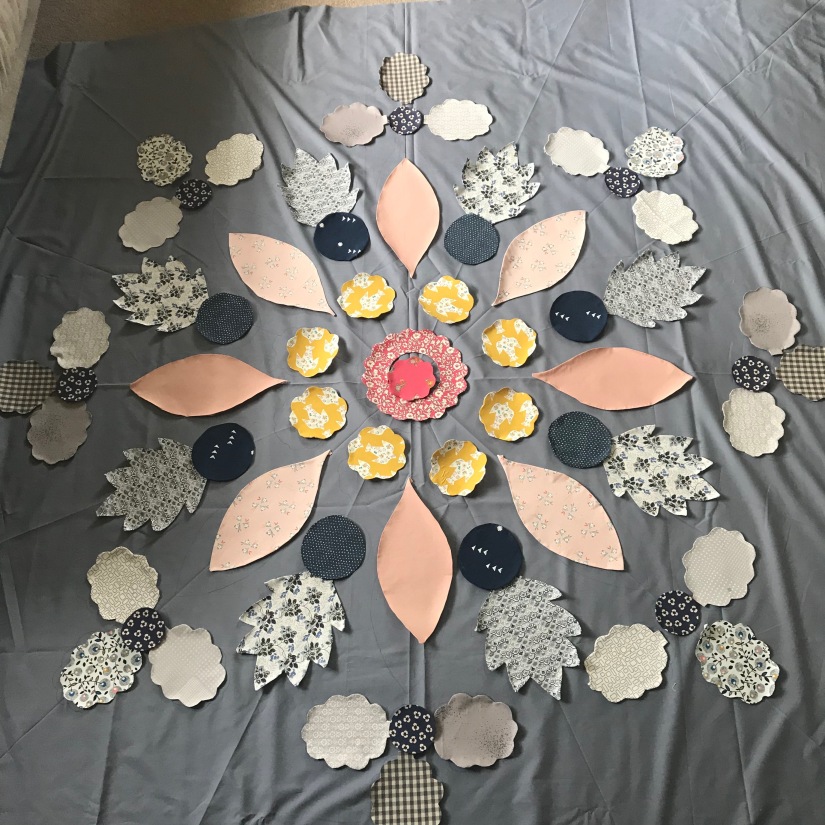 Because the RIB was run by civil servants, and they like order and precision and records, we have sets of the most common templates preserved in files from the time that have subsequently been passed to The Quilters’ Guild Collection. Each fanciful dramatic pattern is made by by putting these simple small innocuous shapes together in different and more inventive ways. But the constituent parts very often were common to many quilts and their names would be known and referred to by quilters for ease of discussions and idea circulation. I was lucky enough to be offered a copy of these original RIB templates to use for this quilt after a chance conversation with a quilt historian at a show. 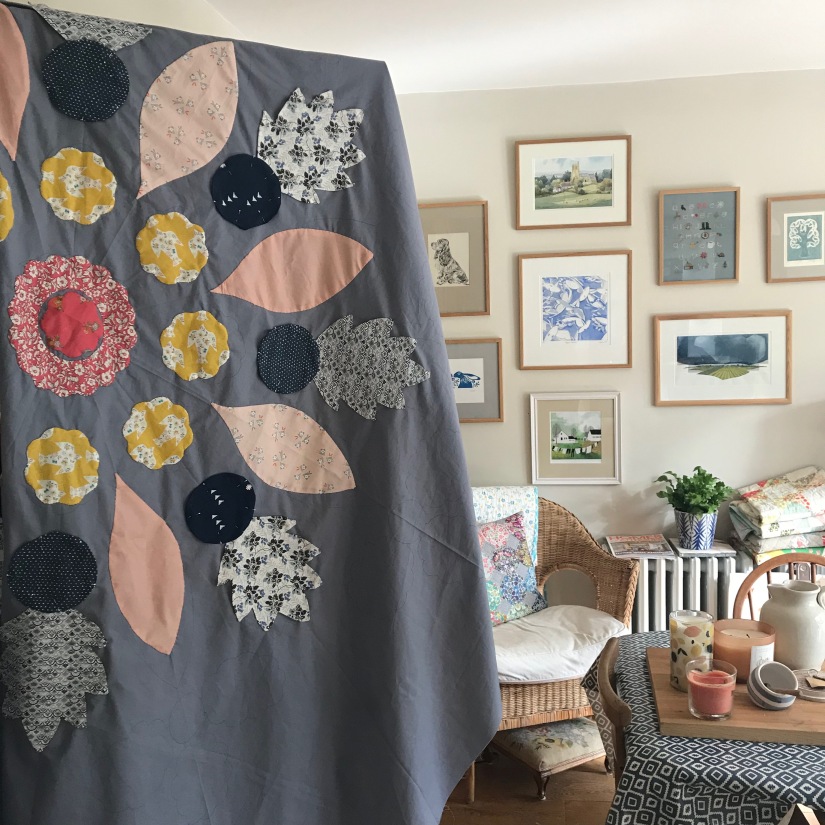 I love Northumberland. I visit every year, I never want to leave, and as I sit quilting looking out at the sea or in the purple Cheviot Hills I like to think that my quilting soul has come home. I knew that I wanted to make a North Country quilt for some years but I also knew I didn’t want to make a straight copy. I love to take traditions of British quilting and apply them to the kinds of quilts that we love today. I felt that the central Rose designs in the centre of the quilts I loved would make fabulous applique motifs. I love a circular centre to a square quilt, from my Arts & Crafts Quilt to my Dahlias this is a design I come back to again and again. I decided to create an applique central Rose and then fill in the borders and background with the hand quilted patterns of the original to create a strong modern North Country quilt – its patterns a link back in time, but its look as relevant today as they ever were.

I called this quilt the Misses Barron quilt because I’m basing my version on a quilt attributed to the two Miss Barrons from Allendale in 1900-25 from the Quilt Treasures book. This quilt particularly appealed to me (as a typical George Gardiner inspired style), not least because my earliest haberdashery experiences were in a shop called The Stitch in Time run by the two elderly unmarried sisters called the Miss Goultens in the rural Leicestershire village where I grew up. Their shop was the front room of a small white cottage (pictured today below, the house still called the ‘Stitch in Time House’) next to the church and they were also church wardens and when the bells rang they would sometimes have to rush out next door to attend to something while you choose your buttons. I have a nostalgic fondness for sisterly sewing and I like to imagine the Miss Barrons working together in filial harmony on this beautiful quilt. 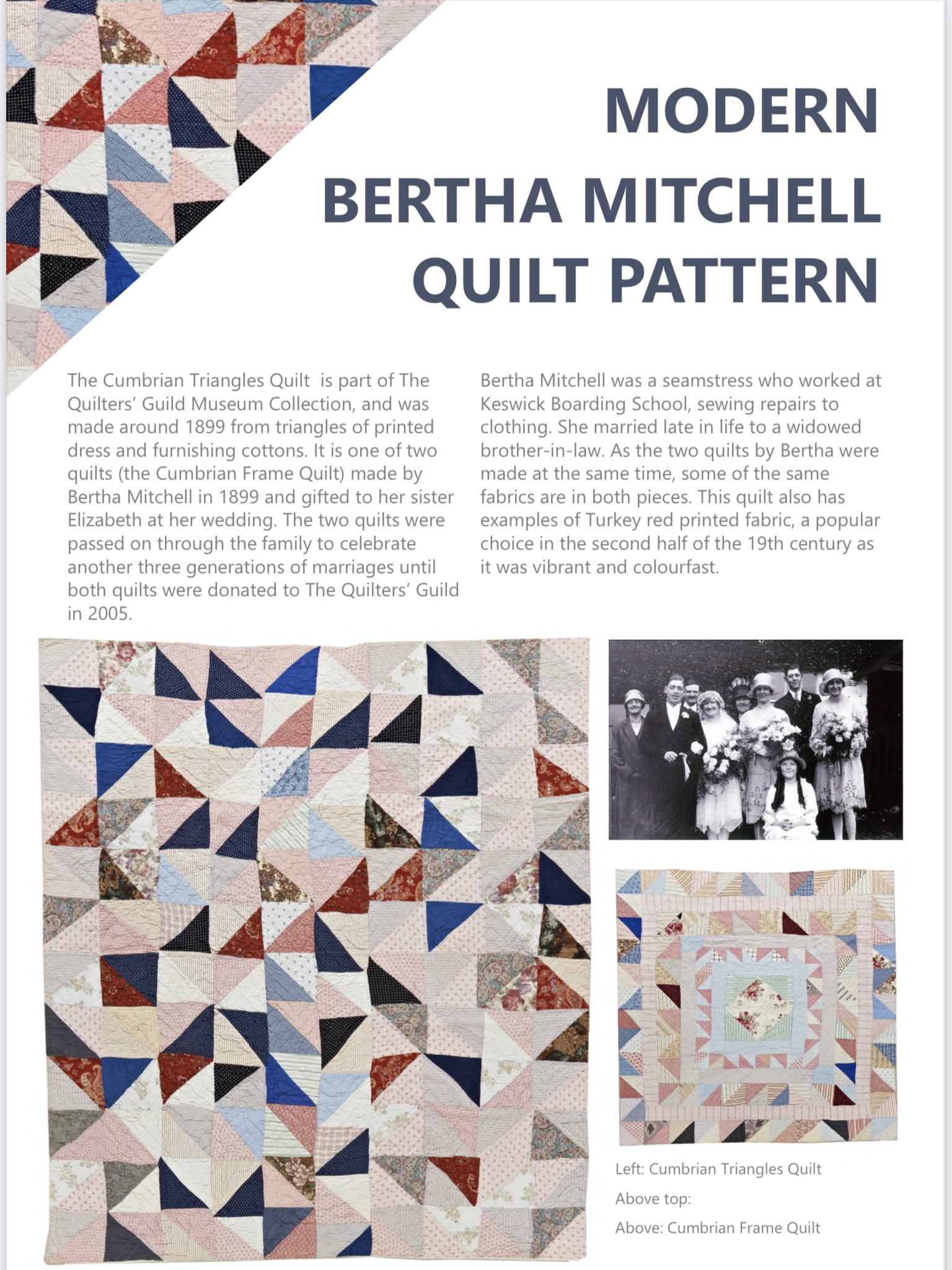 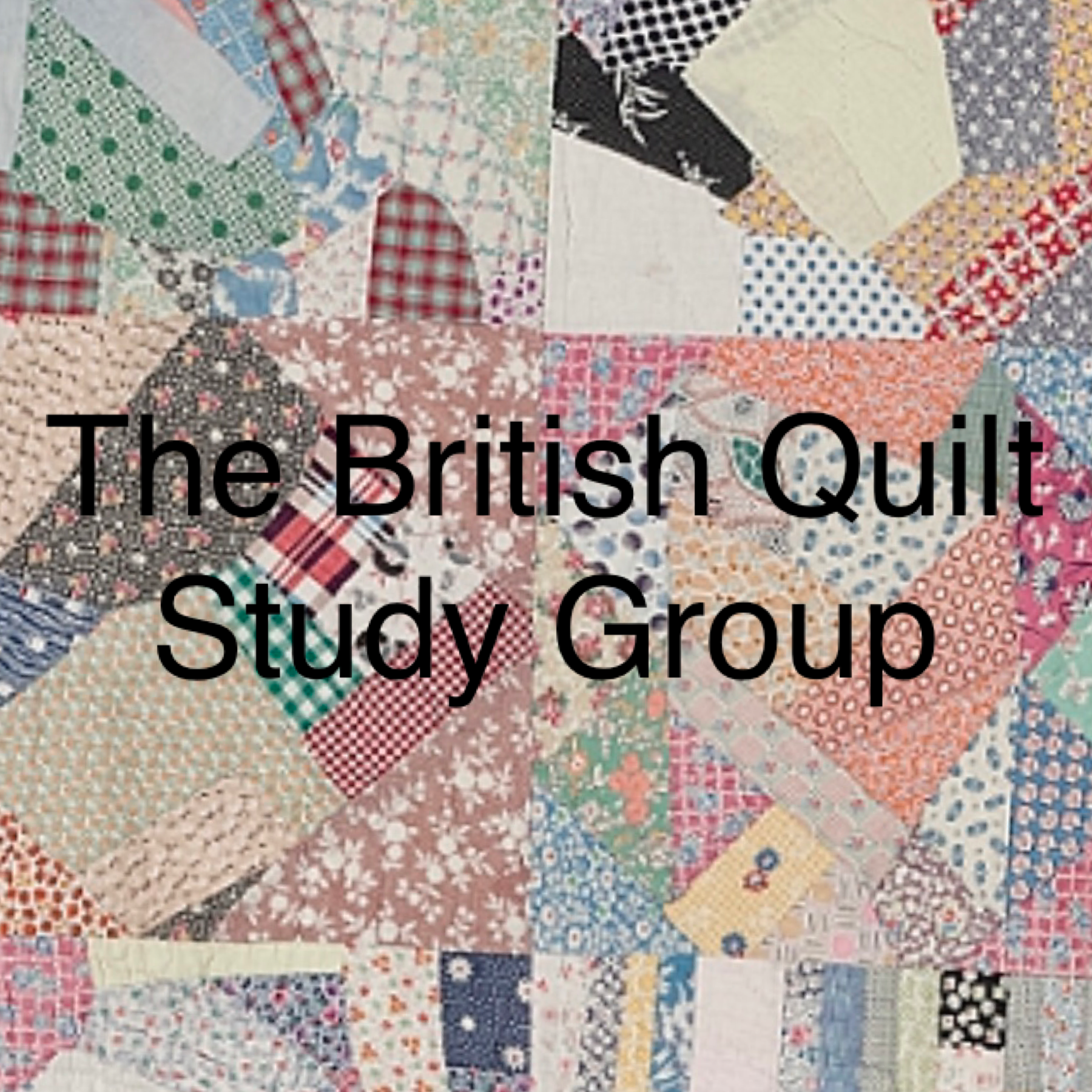